King read from his and Owen’s upcoming book Sleeping Beauties on November 16. Here is a recap of the event.


Stephen King gave a Princeton audience a preview of his newest work, which will be published in 2017.

The legendary author shared two excerpts from “Sleeping Beauties,” which Mr. King wrote with his son, Owen King, an author in his own right, having published such acclaimed books as “We’re All in This Together: A Novella and Stories,” and “Double Feature: A Novel.”

During his reading — which was part of the Althea Ward Clark Reading Series, presented by Princeton University’s Program in Creative in Writing — at McCarter Theatre on Nov. 16, Stephen King read the excerpts from an iPad. He explained that he and his son started working on the book two years ago after Owen came to him with an idea — a story about what would happen if all the women in the world fell asleep.

Mr. King, whose bibliography of bestsellers includes “Carrie,” “The Shining,” “Misery,” “Under the Dome,” and “11/22/63,” said the idea brought two memories to mind. His mother-in-law once told him that if you go into someone’s house and there isn’t a ring in the toilet bowl, it means a woman lives in the home. The other thought was his mother saying that no man knows how to property fold a shirt (men who served in the military may disagree).

Wearing jeans, a collared shirt, and sneakers, Mr. King was introduced by Joyce Carol Oates. Mr. King talked about the story, and a bit about writing. “One of the reasons writers write is to figure out what they think by codifying it into words,” he said. He also joked about pushing the wrong button on his iPad and losing the excerpts, “What will you do then Smartass?” he said to himself. He added that while the iPad is amazing, he preferred reading printed pages. “These are just boops and bleeps,” he said of the words on the screen. It was an interesting remark from a writer who was among the first major authors to publish an original story as an e-book, and who has published a few things exclusively for Amazon’s Kindle.

The stage was decorated with the set for a production of the musical “Once,” presented by the Lewis Center for the Arts. Standing before some wooden tables, a bar and under dozens of hanging chandeliers, Mr. King read two excerpts from the book, one from a man’s point of view, and one from the point of a view from a female character, who is existing in another dimension. 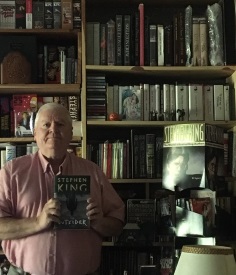