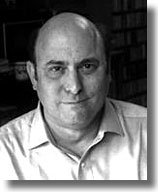 Here is a recent interview with Peter Straub from www.scifi.com in which he talks about the future for The Talisman on the big screen.


There's been talk of turning The Talisman into a miniseries over the years. Any progress?

Straub: I have some very interesting news about that.

The Talisman was bought by Universal as a vehicle for Steven Spielberg. Universal bought it because Spielberg told them to. In 1984, Spielberg had tremendous clout. So they bought, gave it to him and he lost interest. It was no longer the sort of thing he felt he wanted to do. He wanted to do more mainstream, more worthy projects. It vanished.

The miniseries idea was floated. Spielberg liked the idea of having a miniseries. He had people in mind to direct it. It went through various revisions and that died.

Five or six years later, Kathleen Kennedy and Spielberg were back to being partners, decided once again to do it as a miniseries for ABC. That sounded like it would work (Mick Garris had written a screenplay and had planned to direct the project). They had a very good script and that died.

Now there's a friend of mine, who is a very, very good writer. I won't name him. But he told me he got a call from his agent, who asked if he would be interested in doing a screenplay for a movie of The Talisman. My friend said, "Who would direct it?" And his agent said, "Spielberg." My friend said, "Yeah, I'd like to give that a crack." Who knows, it might happen. I would be very, very pleased to see that particular combination.

The Talisman was re-released shortly before Black House. Both novels ended up on the best-seller list at the same time. Were you surprised that there is still a lot of interest for The Talisman?

Straub: It was very gratifying to see that. Random House was especially gratified because they had sold a lot more copies of the new version of The Talisman then they had expected to, both in hardback and paperback. It was warming and rewarding the book would get a whole new audience all over again. I don't think that happens very much.

I had very mixed feelings about The Talisman for a long time. But when I read it in preparation for starting work again with Stephen King on Black House, I surprised myself on how much I liked it. I thought it was really, really a nice book.

Did the Internet and electronic media make the collaboration of Black House easier?

Straub: Yeah, that's right. Though we had one of the first modems in the early '80s. The modems were big machines with telephones on top of them. You had to dial the number, we didn't have hard disks then. The floppys were like 78 records. This was before Windows, so you had to punch in a certain DOS code. Then you could hear your computer make these digesting sounds. Grumble, click, growl. It went on for half an hour while it sent a hundred pages.

When I got the pages from Steve [King] I could see them come onto the empty floppy. Line by line down the page of my monitor. They scrolled by past, but you could still read them.

There were all sorts of glitches in codes. He was using a Wang and I was using an IBM. They had different codes for italics, for bold, all that kind of thing. Even for paragraphing. We had to figure out little symbols to use in place of the ordinary symbols and inform the machine that those symbols were codes: italic, indent, etc.

After I wrote the whole thing, I'd then do a global search and replace for italic, quotation marks. And Steve would do a reverse global replace.

This time around, of course, it was much, much easier. It took seconds to send 100 pages through the Internet. It is vastly more convenient.

Thanks to Terry Warrick.
Read all The Talisman news
To the news archive 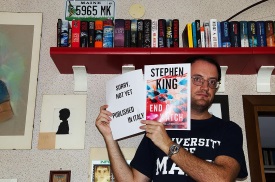