This very interesting news just poped up on Joe Hill's official site, and we all know who his paw is, right:


It’s true that at the moment I’m knee-deep in a novel that I didn’t expect to be writing, and having a hell of a good time with it, thanks. And until I turn in the new book, I won’t have a lot of time for short fiction. But I recently collaborated on a novella with my Paw, so that’s coming down the pike. I also promised a short story to a couple friends for their upcoming anthology, and although I don’t keep all of my promises, I plan to fulfill that one. And while Locke & Key isn’t short fiction in the traditional sense, I’d argue that crafting the script for a 22-page issue calls on a lot of the same skills you need to execute a short story. I’m still a guy who believes most 300 page novels would play better as 30 page shorts, and who feels most at ease writing stories that can be read in a single sitting; I have a basically short story imagination, I think.

Thanks to Ross Warren, Marco Lammers and Sam
Read all King & Hill news
To the news archive 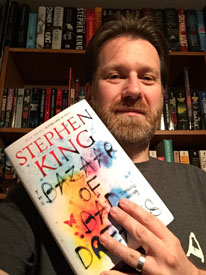