The Gunslinger (influenced by)

I have just finished listening to John Flynn's CD The Gunslinger. This is a CD full of music based on King's first book in The Dark Tower series. This is the kind of music that has no lyrics, just music. You'll recognize if from several movies. And even thought the music itself is good there are two major problems with this CD.

The first is that I have a bit of a problem knowing when I should listen to it. When you have this kind of music in movies they are used to set the mode in the movie. Then when they are released on CD only the hardcore fans get it, at least that is my understanding of it.

The problem here is that you can't get it to fit when you read the book. It just isn't possible to time it with the book. And if you just listen to it on the stereo or in a Walkman, it tends to be a bit to long and you easily loose the focus of the music. It's much harder then if you have regular music with lyrics.

The second problem is that I have a really hard time hearing The Gunslinger in it. Don't get me wrong, it's nothing wrong with the music but it doesn't get me to think about King's book. I guess it could be just me though…

Lilja's final words about The Gunslinger (influenced by)

And about me not hearing The Gunslinger in the tracks. Don't take my word for it. On the official site (the site is down at the moment) you can listen to clips from the tracks and decide for your self if The Gunslinger is in there or not. 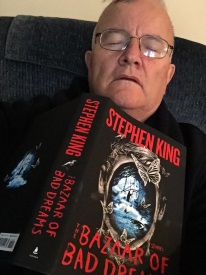