Craig R Baxley to tie Nicole Kidman to the bed?

Seems Gerald's Game might be up for the movies... 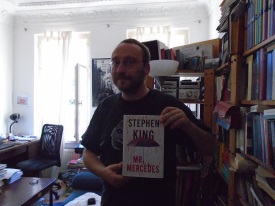