Screen Rant reports that The Dark Tower television spinoff is still on track and Idris Elba is involved. Here is what they said:


The long-proposed The Dark Tower television spinoff is still on track, and Idris Elba will almost certainly be involved. For the past ten years, Ron Howard, Brian Grazer, and Akiva Goldsman have been working on not only bringing Stephen King’s The Dark Tower book series to the big screen, but the small one as well. Long before Marvel had a shared film and television universe, the plan was for The Dark Tower to bounce back and forth between a film and season of TV. The idea sounded audacious at the time, but with the first movie finally arriving next month and the entertainment landscape changed, the Dark Tower TV show is still on track.

Before the movie can jump to TV, however, it needs to prove there’s an audience. The international Dark Tower trailer has continued to sell the adaptation, while everything from Dark Tower posters to a Funko line has been trying to get fans and newcomers excited for what could be the next big blockbuster franchise. In anticipation of the film’s success, it looks like the television show is moving along and will borrow at least one star from the film.

Deadline spoke with Goldsman, who’s both producing and co-writing The Dark Tower. According to him, not only has work begun on the TV spinoff, but Elba is very much involved:

“The first episode of a show has been written, and we hope to retain Ron’s original idea to mix platforms, something that seemed revolutionary 10 years ago but now is something that others have done. Idris for sure is part of this, and if the movie is Roland Deschain the gunslinger, the show is his origin story, based on the fourth novel in the series, Wizard and Glass.” 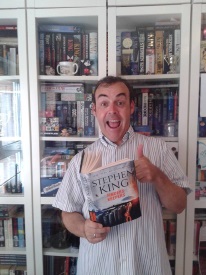