Universal has announced that a house of horrors based on King’s The Shining and the movie adaptation from Stanley Kubrick will be coming to this year’s edition of “Halloween Horror Nights,” a series of huge haunted houses and other big-budget horror-themed attractions in Universal Studios Hollywood and Universal Orlando Resort every October.

A press release from Universal states that visitors to the Shining maze will get to find their way through the Overlook Hotel and its grounds, “bearing witness to caretaker Jack Torrance’s spiraling descent into insanity.” The release promises that “nightmarish visions will come to life in this macabre maze, overwhelming guests with the ‘shine’ of the murderous, ghostly entities that lurk around every turn.” It even promises that those same guests will “relive some of the film’s most iconic, and sinister, moments.” 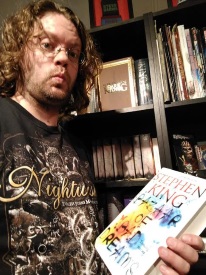