Sony Pictures has teamed with MRC to co-finance The Dark Tower. Sony will distribute what is planned to be the first in a series of movies. A complementary TV series is also being developed by MRC.

The new script is primarily based on the first book in the series, The Gunslinger, and the relationship between Roland and Jake. The film is a blend of horror and fantasy. The latest draft of the script is co-written by Akiva Goldsman and Jeff Pinkner. It was totally reconceived by Goldsman and Pinkner from the version that had been previously developed and which took root first at Universal and later at Warner Bros. Goldsman is producing through his Weed Road with Imagine Entertainment’s Ron Howard, Brian Grazer and Erica Huggins, and I believe the author is also in a producing capacity. Pinkner will be exec producer.

Sony and MRC will go right out after filmmakers with this script, and put this on the fast track that hard-core fans of King’s book have long desired. Numerous stars including Javier Bardem and Russell Crowe have eyed the role of the gunslinger, but that role won’t be filled until after the director is set.

King, who options his works for $1 and likes to see progress, has been incredibly patient as this mammoth project — it’s his answer to Tolkien’s Middle Earth novels — has taken its time and its twists and turns. He’s sparked about where the project is now.

“I’m excited that The Dark Tower is finally going to appear on the screen,” he said in a statement. “Those who have traveled with Roland and his friends in their search for the Dark Tower are going to have their long-held hopes fully realized. This is a brilliant and creative approach to my books.”

Tom RothmanSaid Rothman: “There are few projects out there that compare with the scope, vision, complex characters and fully drawn world that Stephen King has created with The Dark Tower. I am a giant fan. And, as Stephen himself does, we love the direction that Akiva and Jeff have taken. This is a great opportunity for a director to put his or her stamp on a cool global franchise.” 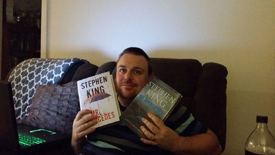