If you want to see Desperation early, here is your chance:


The Tucson Film Office and Fox Tucson Theatre are presenting an exclusive prescreening of Desperation, a made-for-TV adaptation of Stephen King's book of the same name, on Saturday, May 6. Desperation was filmed in and around Tucson and Bisbee in the fall of 2004. Several cast and production members are scheduled to appear and get a red-carpet welcome, including director Mick Garris, producer Mark Sennet and actors Steven Weber, Annabeth Gish and Ron Perlman. The red-carpet opening event starts at 6:30 p.m., followed by opening comments by the director and producer at 7:15, and the film screens at 7:30. Tickets are available for $25 at the Fox Tucson Theatre box office at 17 W. Congress St.

Thanks to Bev Vincent.
Read all Desperation news
To the news archive 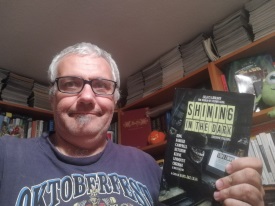