King at a Fundraising Event

King to appear at a fundraising event to benefit Manatee County’s public libraries.


Prolific horror writer Stephen King is expected to fill an auditorium with his fans this fall for a fundraising event to benefit Manatee County’s public libraries.

The Manatee Library Foundation announced this morning that King, a seasonal resident of Casey Key, agreed to donate his services for a Jan. 29 lecture at the Manatee Performing Arts Center in Bradenton.

The foundation hopes to raise $100,000 toward a new operating system to manage the libraries’ acquisition, cataloging and circulation data.

“We knew we needed a very special event,” if it is to reach that fundraising goal, Foundation President Jane Plitt said.

The foundation previously said that it would wait until this morning’s news conference to identify the “internationally acclaimed writer” it had booked for that event. 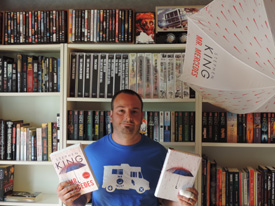