A Summary of the Latest Weeks News

OK, it’s been a week with a lot of news and I thought I summarize it up for you.

- King has announced that Mr Mercedes is the first book in a trilogy about Bill Hodges.

- The second book in the trilogy about Bill Hodges is finished in first draft and will be out in the first half of 2015. The title is Finders Keepers

- The Bill Hodges Trilogy revolves around the City Center Massacre that opens Mr Mercedes and because of that King suggests that it would be a good thing to list all those killed and injured in the massacre. You can find the complete list here.

- The Third book in the trilogy about Bill Hodges will probably be out in 2016.

- King will probably publish a new collection in the fall of 2015. No title or content has been revealed but here you can find what’s not been published yet. It will be stories previously published in magazines, etc. and whether there will be any completely new has not been decided yet.

- The paperback edition of Doctor Sleep is now out and in the US edition there is an 8 page long excerpt from this falls book Revival.

OK, that’s it so far and it’s easy to see that it will be a fun year and a half! 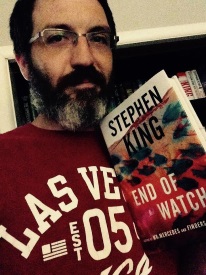