Brian K Vaughan has left Under the Dome

Brian K Vaughan has stepped down as executive producer/writer for Under the Dome a few months ago, something that seems to have gone unnoticed until now... In an interview with Bleeding Cool Brian had this to say.


RJ: Under The Dome is coming back… what’s your involvement with that show, now? And are you seeking similar roles in other series in the future?

BKV: Yeah, I don’t think this has been reported anywhere, but I actually left my position at Under The Dome a few months ago. It was the great thrill of my life to help adapt one of the best book’s ever from my all-time hero, but I’ve got two very young kids at home who I never got to see last season, so I’m enormously grateful to CBS and Amblin for letting me out of my contract a little early. I’m already missing the cast and crew, but the show remains in the excellent hands of our veteran showrunner Neal Baer, and we were lucky enough to hire some heavy hitting new writers for this season, including none other than Mr. King himself. His first episode is easily the best of the series so far, and helps set the tone for a fucking crazy new direction, so I look forward to getting to watch as a fan with everyone else. 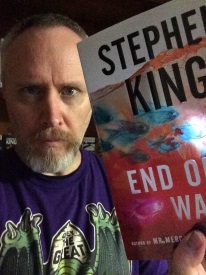