The Drawing of the Three Comic

Comic Book Resources reports that Marvel will turn The Drawing of the Three into a comic.

During his Emerald City Comicon Secret Origins panel, Peter David was asked by a member of the audience whether he enjoyed the collaboration with his co-creators on the "Dark Tower" comics. Rather than answer directly, he revealed the Marvel adaptations of Stephen King's fantasy epic will resume with "Dark Tower II: The Drawing of the Three." He also provided the 'secret origin' of how the project was greenlit.


"We are going to be doing more 'Dark Tower.' 'The Drawing of the Three' will actually be happening in comic book form," David stated. "We are very, very pleased about that. I literally just got an email about this, two days ago. And it's really funny -- would you like to know why we're doing more 'Dark Tower?' OK, no -- well, yes, but -- OK. Funny story! [Laughs]

"I had a stroke about a year and a couple months ago, and I was in a recovery center down in Jacksonville, FL, because I had the stroke down in Orlando, FL, during our vacation to Disney World," David continued. "Go to Disney World, have a stroke and then go see Goofy! [Laughter] Because you're both going [imitates Goofy's laugh]! At any rate, so -- I get an email from Robin Furth, who is my co-writer on 'Dark Tower,' and she says, 'Stephen would like your email. Can I give him your email address?' So I go, 'Sure!' So I get an email from Stehen King, and Stephen says, 'I'd like to come up and visit you, you know, up in the hospital. I'm down in Florida.' And I went, 'OK - sure!' And he drove up. And I thought that he was in Jacksonville. No -- he was five hours away. He did a five hour drive to come up and see me, because I think he was really relating to the concept that I was having to teach myself how to walk again. Because he had to go through the same thing when he got hit by that van, so this was really his wheelhouse. And while he was there, I said to him, 'You know, we should really do more 'Dark Tower,' 'cause I get a lot of people coming up to me, saying, "I want to see 'The Drawing of the Three.' I want to see the next book."' And Steve said, 'Really?' And I went, 'Yeah!' and he says, 'OK -- we'll do that!' And then he contacted Marvel Comics, and... Marvel went, 'OK!' And lo and behold, now we're doing 'Dark Tower' again, so thank God I had a stroke!" 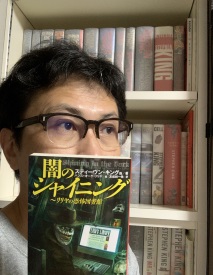