2nd season of Under the Dome further from the book

Will the second season of Under the Dome be further from the book then the first one? Looks like it...

"Under the Dome" season 2 returns to CBS on Monday, June 30 at 10pm ET/PT. According to BuddyTV.com, CBS Entertainment President Nina Tassler said that the new season "goes places the book never went."

Though fans of "Under the Dome" may find this disheartening, Tassler adds that the CBS series is "thrilled to have the master storyteller himself, Stephen King, tell the first [episode] of next season," she said, thereby confirming that King will remain heavily involved in the writing process of "Under the Dome" season 2.

Because the show must introduce new characters to continue the storyline, new cast members will be introduced after the air date, including: Junior's uncle, "who's been hiding out for reasons we find out," and a new teacher who will teach the drama's kids "how to arm and keep Chester's Mill running." The teacher will most likely be a rival for Dean Norris' character, Big Jim.

Speaking of Big Jim: a new teaser trailer hints that he and Sheriff Linda share an intimate kiss!" 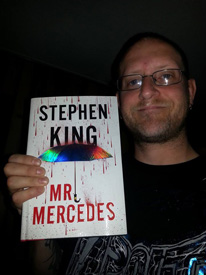