No Shining prequel if it's up to King

It's been reported that Glen Mazzara was writing the script for the prequel for The Shining and now King has commented on it...


“There’s a real question about whether or not they have the rights to ‘Before the Play,’ which was the prologue cut from the book — because the epilogue to the book was called ‘After the Play.’ So they were bookends, and there was really scary stuff in that prologue that wouldn’t make a bad movie. Am I eager to see that happen? No I am not. And there’s some real question about what rights Warner Bros. does still have. The Shining is such an old book now that the copyright comes back to me. Arguably, the film rights lapse — so we’ll see. We’re looking into that.

I’m not saying I would put a stop to the project, because I’m sort of a nice guy. When I was a kid, my mother said, ‘Stephen if you were a girl, you’d always be pregnant.’ I have a tendency to let people develop things. I’m always curious to see what will happen. But you know what? I would be just as happy if it didn’t happen.” 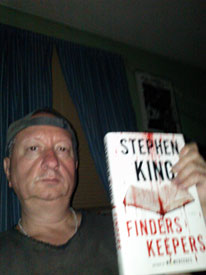