OK, the contest is over and we have two lucky winners that will each receive a copy of the audio edition of A Face in the Crowd but before I reveal who they are, here are the correct answers:

Question 1: King and O'Nan wrote Faithful together, what year was the book released in the US?
Answer 1: 2004

Question 2: What’s the main characters name in A Face in the Crowd?
Answer 2: Dean Evers

Question 3: What country was first to publish King’s book From a Buick 8?
Answer 3: Germany. They where about 6 month ahead of the US since the US and the UK switched the release of From a Buick 8 and Everything’s Eventual.

Question 4: Name one person, except Stewart O’Nan, that King has collaborated with on a story.
Answer 4: Peter Straub and Joe Hill

Question 5: How many episodes has been released of The Lilja & Lou Podcast?
Answer 5: 6 episodes. One was divided in two parts though.

Question 6: How many discs will the audio edition of A Face in the Crowd have?
Answer 6: 1

And the winners are Sheila Buchholz and Robert Duling. Congratulations! 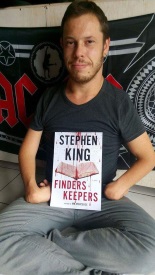