JOYLAND, a new novel by Stephen King, in June 2013. Set in a small-town North Carolina amusement park in 1973, JOYLAND tells the story of the summer in which college student Devin Jones comes to work as a carny and confronts the legacy of a vicious murder, the fate of a dying child, and the ways both will change his life forever. JOYLAND is a brand-new book and has never previously been published. 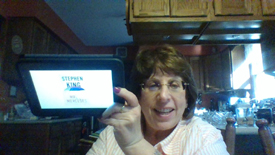