The Lawnmover Man as a TV series?

Blood Disbusting reports that a TV series based on The Lawnmover Man (the movie not King's story) is in the making. Please don't do this!


The original film being one of the worst movies ever made isn’t deterring the powers that be from making a “Lawnmower Man” TV series. Let’s hope they stick to the new “it’s closer to the book” axiom. Whoops? They’re basing them on the movie and its sequel? With “state of the art CG”? I’m moving to an island STAT. The series is being put together by Park Entertainment and David Tichter (Morgan Stewart’s Coming Home) is writing the pilot.

Per Moviehole, “Park Entertainment are packaging 26 one-hour episodes of a show that, like the two “Lawnmower Man” features that preceded it, will combine live-action and some rather state-of-the-art special and visual effects.
While the original King short story concerned a man who conjures up an unholy, autonomous lawnmower to cut a clients lawn, before munching down on the grass himself (yes, totally odd), the film version told of a mentally-retarded lawnmower man named Jobe who is coaxed into being a guinea pig for a scientist’s virtual reality experiments, ultimately becoming more intelligent in the process but also evil.” 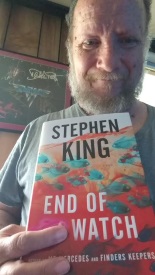