The Oscar-winning director of The Silence of the Lambs Jonathan Demme has picked up the film rights to 11/22/63. Demme will write, direct and produce the film through his Clinica Estetico production company. Ilona Herzberg, who tackled a different kind of JFK story in the Cuban Missile Crisis drama Thirteen Days, is also producing, and King himself will executive produce.

Thanks to Ari, Anders, Hans, Al and everyone else who's emailed me about this. 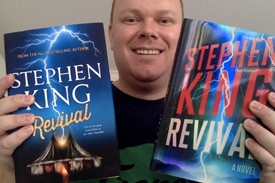