Looks like King will have a new short story published in May...


Stephen King’s short story, “Herman Wouk is Still Alive,” will be published in the May issue of The Atlantic, on newsstands April 19 and available on the web and to subscribers a week earlier.

For those unfamiliar with that name, he is the author of The Caine Mutiny, The Winds of War, and War and Remembrance. The Winds of War was a major miniseries about 20 years ago. 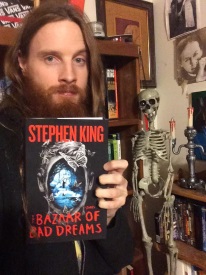