While we can't get to the chat from yesterday, here are some of the things King said:

- He said that he applied to the Bangor Police but they wouldn't take him because he had a couple of minor busts.

- He said he's written a screenplay for A Good Marriage and hopes it's made into a film.

Read all Full Dark, No Stars news
To the news archive 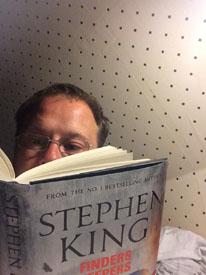