Carrie back on Broadway?

CARRIE's On the Way Back to Broadway

PC: Oh, I know and I love the improvements. Actually, earlier today, I interviewed Preston Sadleir who was in the workshop. It's fate for you to give me this scoop! I love, love, love the new version. Is it coming back to Broadway?
LG: I believe they are going to try, yes. I believe they are going to do it with Bernie Telsey. They are heading in for, I think, another reading and then I think they are then going to go into production.

PC: They've done amazing work. It's one of the great lost scores.
LG: And I know that they've spent a lot of time rewriting. Dean [Pitchford, the lyricist] has been in a lot over the summer. They've rewritten the entire second act. They've put a lot of work into it!

PC: And it shows!
LG: And they've marked that time out, they expect to be in and stay in New York for the workshops. It's gonna be a go!

PC: No way! CARRIE is coming back to Broadway!
LG: I've got my fingers crossed, I'm sure it's going to be wonderful.

PC: All the Broadway fans cannot wait for this.
LG: They won't have to wait much longer! 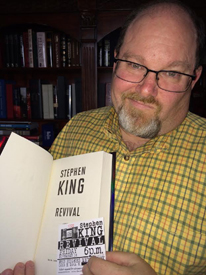