Dark Tower as a screen trilogy and TV series?

Very interesting information surfaced recently. If it’s correct King’s Dark Tower books is set to be a screen trilogy and TV series. Exactly what this means isn’t all that clear. Is it three TV movies? That will be extremely hard to succeed with. Is it three TV series with say 12 episodes each? That would work. Can Akiva Goldsman (script), Ron Howard (directing) and Brian Grazer (producer) pull it off? I have no idea. And, what happened JJ Abrams and Damon Lindelof? I have no idea.

I’m working on getting more info on this as we speak so stay tuned. In the meantime, check out the full news (as it was reported by Deadline below.


EXCLUSIVE: In a whopping deal coming together quickly, Stephen King, Imagine Entertainment and Weed Road are in discussions to make a screen trilogy and TV series out of King's epic novel series The Dark Tower. Akiva Goldsman will write the script, Ron Howard will direct it, and his Imagine Entertainment partner Brian Grazer will produce with Goldsman and King.

Universal is in talks to acquire a package that included the books, and the attachment of the team behind the Oscar-winning film A Beautiful Mind and The Da Vinci Code. Both Universal –where Imagine is based—and Warner Bros—where Goldsman’s Weed Road banner is housed—have been vying for the project.

The Dark Tower is King’s answer to JRR Tolkien’s The Lord of the Rings, and the author will get his own screen trilogy. Like Tolkien, King's epic novel series is set in an otherworldly but familiar world, and involves a quest to save the world. The series spanned seven novels that involved Roland Deschain, the last living member of a knightly order of gunslingers who exists in a world that has an Old West feel, but which is infused with magic. He is on a quest to find the Dark Tower, a structure that holds the key to the nexus of all universes. He encounters many allies and enemies along the way, as the world crumbles around him.

The book series was once developed by JJ Abrams and his Lost cohorts Damon Lindelof and Carlton Cuse, but they never cracked it. Goldsman, who has become a prolific producer, was the catalyst for securing the rights from King, and he brought it to Howard and Grazer. It was not immediately evident how large the transaction was, but King has often optioned his works for little or no money upfront, and reportedly he bestowed the rights on Abrams for $19, a number which has significance in the novel series. King is working on an eighth novel, one that doesn't change the ending, but deals with characters and a storyline that falls midway in the series. CAA is working on the deal.

Thanks to Joel, Ariel Bosi and Maribel Deschain
Read all The Dark Tower news
To the news archive 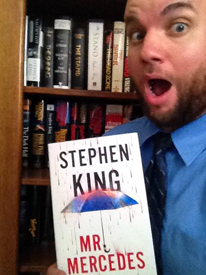