BALTIMORE -- March 29, 2010 -- Cemetery Dance Publications, the world’s leading independent publisher of collectible horror and suspense books, has just announced Blockade Billy by Stephen King, an original, never-before-published novella that only the King of Horror could have dreamed up. The Cemetery Dance exclusive hardcover will ship mid-April.

"I love old-school baseball," Stephen King said, "and I also love the way people who've spent a lifetime in the game talk about the game. I tried to combine those things in a story of suspense. People have asked me for years when I was going to write a baseball story. Ask no more; this is it."

Cemetery Dance and Stephen King kept Blockade Billy under tight wraps so it could be a surprise publication for the beginning of the baseball season. Even diehard baseball fans don't know the true story of William Blakely, but in just a few weeks readers will be holding this dark tale in their own two hands.

"As a lifelong baseball fan -- and long suffering Orioles' fan -- I can't think of a better way to open the 2010 season than publishing Blockade Billy," said Cemetery Dance Publisher Richard Chizmar. "Stephen King and I have corresponded about baseball and books for almost 20 years now... So to combine the two is a dream come true for me."

Chuck Verrill, King's agent, said: "Any time a Red Sox fan, an Orioles fan, and a Yankees fan can cooperate on something, the result is bound to be fantastic."

For a very limited time only, Cemetery Dance Publications will include an authentic William "Blockade Billy" Blakely baseball card with every copy of the trade hardcover.

Read all Blockade Billy news
To the news archive 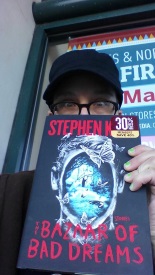