"In a recent AP interview, John Mellencamp talked a teeny bit about the musical he's writing with Stephen King.


What will the musical you're writing with Stephen King be like? MELLENCAMP: (Laughing) I can tell what it's not going to be like: It won't be "Jack and Diane" meets "Cujo." He's already written the story -- it's very beautiful, more like "The Green Mile." It's an American story about an American family. Some of the characters are 100 years old, some are 15. So that will give me the opportunity to write for each character in a different style. I ain't writing a bunch of rock songs"

Thanks to Jonathan Reitan.
Read all The Ghost Brothers of Darkland County news
To the news archive 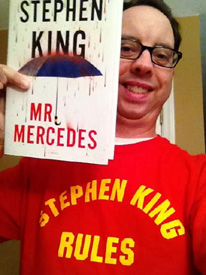