How about terrestrial radio?

The prolific author has always been a passionate music fan, even moonlighting as a rock star on occasion as a part-time member of Dave Barry’s ad hoc literary rock band, the Rock Bottom Remainders. But over time King found less and less that caught his ears when he would spin the radio dial, which is part of what led him to take on a key role in Shooter Jennings’ ambitious new concept album, “Black Ribbons,” a project that's explored in a full Calendar feature in Saturday's paper.

“I'm a big alt-country fan, but I got to a place in my own musical listening where I was starting to not listen anymore,” King said when he called the other day to talk about volunteering his voice as narrator of Jennings’ atmospheric tale of a late-night radio talk show host who is the last voice of freedom in an increasingly restrictive society.

“Shooter was one of the artists they played, and I liked the thing he was doing, the playfulness of it,” King said. “I still don’t remember how he got my e-mail…but he sent me a note saying ‘I have this idea — would you be interested?’”

“He had visualized the last disc jockey in the world doing this kind of pirate radio thing — he’s going to be shut down, and he knew he was going to be shut down," said King, noting that he owns two radio stations himself: "one rock, one talk." "So on his last show he’s playing cuts from his favorite group, which was this [Hierophant] group Shooter had envisioned, and he’s playing all the songs on their record.... I heard that and said, ‘I want to be part of it.’”

King sounds like he’s having a great time with his role as a deejay named Will O’ the Wisp on “Black Ribbons,” which comes out Tuesday. Jennings, the son of Waylon Jennings and Jessi Colter, had gotten the idea “to make a record that’s carried by one voice,” and as a longtime fan of King’s writings, he quizzed friends and associates for six months until one of them produced an e-mail address so he could send off his pitch.

In fact, the whole collaboration between Jennings and King was conducted by e-mail. The two still haven’t met, or even spoken by phone. “We’ve exchanged pictures of our children and [my] grandchildren,” King said. “I hope we get to meet one of these days.” 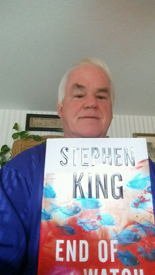