According to Variety, E1 Entertainment has committed to 13 hour-long episodes adapting Stephen King’s novella The Colorado Kid into a television series called Haven.

Scott Shepherd will serve as showrunner and exec produce with Lloyd Segan and Shawn Piller, all three of whom were exec producers on USA Network's version of The Dead Zone.

The report describes the project as, “centers on a spooky town in Maine where cursed folk live normal lives in exile. When those curses start returning, FBI agent Audrey Parker is brought in to keep those supernatural forces at bay — while trying to unravel the mysteries of Haven.”

E1 is in advanced talks with several European broadcast partners to sign on and help finance the show. After securing an international partner, the company will turn its attention to finding U.S. and Canadian broadcasters. 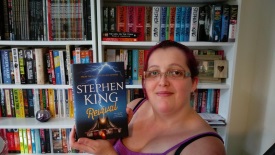