King will be writing for Fangoria:


Stephen King, the world’s best-selling author of horror and dark fantasy, has submitted an exclusive, all-new article for publication in FANGORIA magazine. The 7,500-plus-word essay, entitled “What’s Scary,” will be published in two parts, beginning with FANGORIA #289, on sale in December, and concluding in FANGORIA #290, arriving in January 2010. “I’ve wanted to be a Fango contributor ever since I purchased my first issue,” King says. “For me, this is a nightmare come true.”

“What’s Scary” critiques the last decade of genre cinema, from 1999’s phenomenon THE BLAIR WITCH PROJECT to this past summer’s surprise smash DISTRICT 9. He also chooses his favorite films and touches on the recent flood of horror remakes and zombie flicks, making many surprising and enlightening observations.

“Stephen’s article not only arrives just in time for the holidays, but is also the perfect way for FANGORIA to wrap up 2009, the year we celebrated the magazine’s 30th anniversary,” says Fango editor Tony Timpone. “It has always been a dream of mine to have King listed as a contributor on our masthead, and the fact that he has written enough for two issues is just icing on the cake.”

The author promises to answer the following questions in his piece (excerpted from his introduction): “First,” King writes, “why do so many so-called horror movies, even those with big budgets (maybe especially those with big budgets) not work? Second, why do fans of the genre such as myself so often go in with high hopes and come out feeling unsatisfied…and, worse, unscared? Third, and most important, why is it that others—sometimes that most unheralded others, those with teensy budgets and unknown, untried actors—do work, surprising us with terror and amazement?”

King has been featured in FANGORIA’s pages since its earliest issues. For Fango’s 100th edition (pictured left), the Maine resident told interviewer Philip Nutman, “It’s one of the magazines that comes into the house that we all fight over. FANGORIA is always welcome in my house.” King is the author of over 60 novels, which have sold an estimated 350 million copies worldwide and spawned dozens of feature films and TV series, movies and miniseries. In 2003, the National Book Foundation awarded King the Medal for Distinguished Contribution to American Letters, one of many prestigious accolades he has garnered over the years. King’s latest novel, the gargantuan apocalyptic epic UNDER THE DOME, arrives November 10 from Scribner. 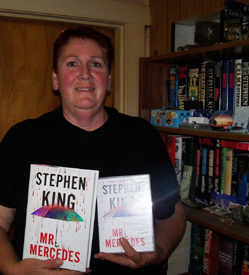