The author said he would "walk over my grandmother" not to miss the programme, currently in its fourth season.

"I love Prison Break madly, deeply, truly. Simple as that," he wrote on EntertainmentWeekly.com.

"What makes this so much damned fun are bright exteriors, crisp cutting, outrageous action sequences, and, most of all, the acting ensemble.

"I especially enjoy William Fichtner as Alex Mahone - Fichtner's probably the best character actor on TV. These guys play it straight, so the audience does the same.

"There's also a crazy existential subtext: No matter what these hapless escapees do or how fast they run, they always end up...booya!...back in prison."

King continued by saying he would like to see the fifth season filmed in Siberia.

Recent rumours have suggested that the four-year series may be coming to an end after a Fox insider predicted a major scheduling shuffle to bloster dwindling US ratings. 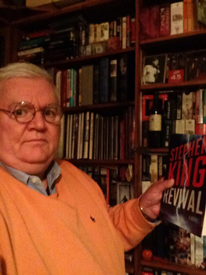