Limited One For The Road

PS Publishing is releasing a limited version of One For The Road and here is how you can get a copy:

We’ve negotiated the one-off rights to publish Stephen King’s wonderful story “One For The Road” (a favourite of mine) as a strictly-limited, extensively illustrated, full colour hardcover edition.

Steve won’t be signing any copies - he’s still nursing his wrist from The Colorado Kid (heck, he had to type the last couple of novels one-handed! - what a week that turned out to be!) - but the top state will be signed by the artist and it’ll be slipcased and, like the edition going out to subscribers to the unsigned Postscripts, strictly numbered. First come, first served… and when they’re gone, they’re gone. But hold on there, hoss… the order box is not yet up on the website - but it will be in the next week or so. This is just by way of a heads-up. And no, we don’t have details of the artist at this stage - we’re still discussing the possibilities with Steve. As soon as we know, you’ll know.

The books will be ready during the first half of 2009 and you can read more here.
To the news archive 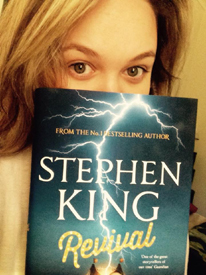