Latest on Children of the Corn

The new Children of the Corn is rolling soon.


Iowa’s Quad-City Times reports that a remake of 1984’s CHILDREN OF THE CORN will be rolling on locations in the state next month. Written, produced and directed by Donald P. Borchers, one of the producers on the original movie (pictured), this CHILDREN will air Stateside on the Sci Fi Channel in 2009 and will play theatrically in Europe. Borchers tells the site that this adaptation of the Stephen King story will eschew the alterations that displeased both the author and his fans. “They put a lot of sugar, if you will, into the coffee,” he says. “Stephen King doesn’t take his coffee with sugar…it’s no longer requisite to have a happy ending. We wanted to stay faithful to the decisions in his original story.

“We are still scouting throughout the Quad-Cities and the countryside beyond, obviously, since it’s CHILDREN OF THE CORN,” Borchers says of his decision to lens in Iowa, where the ’84 film also shot. “My needs are quite simple. I need corn, and I understand you have that throughout the state.” Casting has not been finalized, though Borchers says, “I have a lot of interest of people wanting to be in it.” 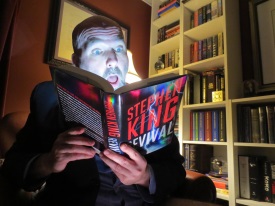