From a Buick 8 moving along

Here are some info about the movie version of From a Buick 8:


CHIZMAR/SCHAECH: We have been working on FROM A BUICK 8 for so long and are finally so close to a "go" that we are afraid to talk too much about it and jinx it. What we can say is that we are currently working on one final rewrite for director Tobe Hooper and producer Mick Garris and the good folks at Amicus (producers of the recent STUCK and forthcoming IT'S ALIVE remake). Once the rewrite is completed, they are prepared to go right into pre-production with plans to film on the East Coast. 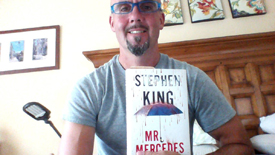