A Bangor fundraiser featuring three best-selling novelists for Senate candidate Tom Allen has been postponed in the aftermath of a controversy surrounding Stephen King's remarks about literacy and the military.

King, who was scheduled to appear June 7 with John Grisham and Tess Gerritsen, expressed fear Monday that what was meant to be a literary event could have become all too political.

King took flak for comments he made to students on April 4 at the Library of Congress while stressing the importance for job seekers of being able to read. "If you don't," he said, "then you've got the Army, Iraq, I don't know, something like that."

In a statement relayed Monday by the Allen campaign, King said he doesn't want to be a distraction. Said King: "Since that might be the case now, it's best to do this event later, but it's just too good not to do it at all."

Allen spokeswoman Carol Andrews said people who bought tickets to the $25-a-person fundraiser can contact the campaign for a refund.

Thanks to Bev Vincent and Miss X
To the news archive 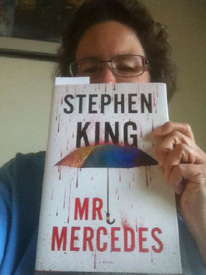