The last day of 2007 is here. Tomorrow it’ll be 2008. It’s funny how fast time goes by. In 2008 Lilja’s Library will celebrate it’s 12th year and it feels just like yesterday that I celebrated the site’s 10 year anniversary. Amazing.

So much has happened during 2007 that I didn’t even imagine would happen. The year started with me getting an interview over the phone with the man himself. Stephen King and I chatted for 45 minutes and I can honestly tell you that that’s one of the most amazing things I have ever done.

I also got to do an interview with Frank Darabont. That one was done by mail and we corresponded some in addition to that as well and I must say that Frank is one of the nicest people I have ever met. Even though he is a big name celebrity he really took the time to put his all into this interview and for that I will always be grateful.

We also got a new Bachman book during 2007. Many with me had been hoping for one but not really daring to think we’d actually get one. But with the release of Blaze we did. Other things that was released during 2007 was the movie version of The Mist and the first story arc of The Dark Tower comic. They where both huge successes.

What can we expect to see during 2008 then? Well, in just about three weeks we’ll get the new book Duma Key. I have read it and I feel quite comfortable with tell you that I don’t think you’ll be disappointed with it.

We will also see the release of the second story arc of The Dark Tower comic. This one is called The Long Road Home and begins in March.

Besides this I have some other projects waiting to be announced. The biggest one is something I’m rather nervous about but I hope you will like it as much as I do. I can’t really talk about it yet but as soon as I can you’ll be the first one to know, that is a promise.

With that said I also want to take this opportunity to thank you all for the fantastic support you have all given Lilja’s Library during 2007. Your support has made the site one of the biggest Stephen King fan site’s on the net and for that I can’t thank you enough. I hope to keep your interest during 2008 as well and I will do everything in my power to give you as much interesting stuff as I possible can.

So, all that is left before the new year is to wish you all a Happy New Year! And I hope to talk to you all again in 2008! 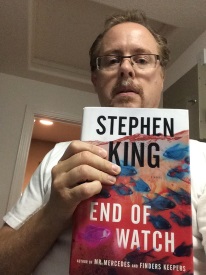