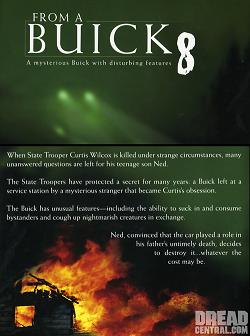 Dread Central reported some good news about the upcoming movie version of From a Buick 8:


The first is From a Buick 8, which you see some early art for on your right. Kasch talked to producer Etchie Stroh of Moonstone Entertainment, who said the script for Buick is in the hands of director Tobe Hooper as we speak, who’s giving it a once-over to tighten it up. It will go to Stephen King, who wrote the novel the film is based on, before cameras roll for final approval.

They’re hoping to have everything ready to go for a shoot date in early 2008 and though no casting’s been done, they will be filming in Pennsylvania which only makes sense, as that’s where the book is set.