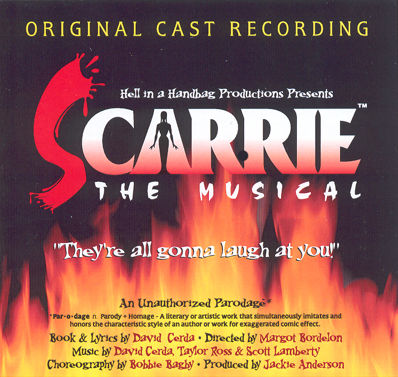 SCarrie The Musical is, as the name implies, a parody of Carrie The Musical which flopped big time. In SCarrie the lead cast (Carrie and her mother) are played by men, dressed as women, the rest of the cast is played by actor and actresses in their right sex though.

The feeling you get from listening to this CD is that even though they wanted to do a comedy they didn’t want to stray from King’s book too much. So even though SCarrie is done in a comic way it still follows King’s book very well. You’re taken through the story with songs like I’m Dying/Plug It Up, Creepy Carrie, Gonna Make You Sweat (in which the gym teacher signs, “Are you going to out-sing me Hargensen? Your out of the prom”), It’s The Prom, I Told You So and Sue’s Nightmare. 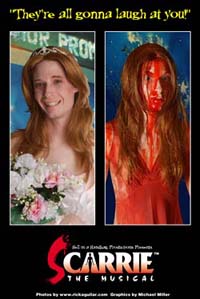 This is the first time I review a musical on CD (there will be a DVD released later) but I have to say that it wasn’t as hard as I first thought it would be. Just by listening to the CD you get a good idea of the musical even though I suspect a big part of the parody gets lost when you don’t see what happens on stage and the actors/actresses themself. In Gonna Make You Sweat which is one of the more graphical pieces you hear Miss Collins telling Chris and the girls that they got detention and when Chris smacks her you can almost feel it sting.

Joey Steakley really looks a lot like Carrie or as you can see he does look quite a lot like Sissy Spacek did in the original movie. The one that looks really odd is Ed Jones as Carries mother Margaret White. Hilarious!

Personally I’m very much looking forward to the DVD release. If it’s half as funny as the CD implies I’ll be laughing my head of, and so will you. 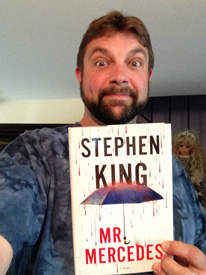