What is Stud City about then? Well, it tells the story of Chico and his life. How he struggles to live a normal life, which isn't easy. His brother is dead and his stepmother is molesting him. The story itself is only about 5 pages long and in my opinion not one of King's best.

Because of this I was a bit skeptic about the fact that it was going to be turned into a movie. I remember thinking that it couldn't be done. Later I learned that it was meant to be turned into the pilot of a TV series called Night Moves. This I though might work, even though it would be hard.

A bit after this I came in contact with Sean Parlaman, the fellow who was going to write the script for it. He agreed to send me a copy and that is what I read last night.

So, how did he do then? Well, not bad, not bad at all. The story is told in two different time spans. One is in 1959 when Chico's brother Johnny is still alive and everything seams to be fine. The other is 1963 when Johnny is dead and Chico's world is falling apart.

At the beginning of the movie (script) there are some passages between the two time spans and this is done very nice. When it's 1959 (the bright and happy time) its summer, day and the sum is shining like crazy. When it's 1963 (the sad time) it's winter, night and really bad weather. This is really setting the mod on the movie right from the start.

Sean is telling the story almost identical to King, with the exception of two big differences. One of the changes that he has done is that in the movie Johnny isn't killed after joining the Marines like in King's story. Here he is killed in a car accident. The other thing is that he gives Johnny more room in the story. Here we get to know him in a way that we don't in King's version. I guess that part of the reason for this is that King's version is far to short for a movie, even if it is a pilot on TV.

Another thing that Sean has done is that he has used the connection King did between Stud City and The Body. Chico's girlfriend is called Jane Tessio and is thereby sister to Vern Tessio, one of the boys in The Body.

On one occasion we get to hear a voice from the radio talking about the missing Ray Brower, the same boy that is lost and later hit by a train in The Body. And there is more. In one scene we see four silhouettes walking on a railroad track. This can't be any other boy's then the ones from The Body.

Combined with this Sean also tries to create the same atmosphere as the one in the movie version of The Body, Stand By Me.

Personally I think Sean did a good job turning this really short story into a script. If I where to try something like that, I wouldn't choose Stud City though, but that's just me.

The fact that he has changed Johnny's death from happening in the Marines to happen in a car accident feels a bit wrong. I can understand that it might have been easier to extend his background that way but still…I think it could have been done without changing that.

I like the fact that he linked Stud City to The Body. I'm one of those who really enjoy it when King is linking his stories together so this was a bonus for me.

To conclude I would like to say that I hope this movie gets done. Not as a motion picture though but as a TV pilot. The script deserves that!

Note: Before I read the script for Stud City I read the older version of King's story. This is the version that was published in Ubris back in 1969. Because of this and because this version is a bit different from the on that is in Different Seasons all of my points isn't correct if you compare it to the Different Seasons version of the story. Please keep that in mind when you read the review. 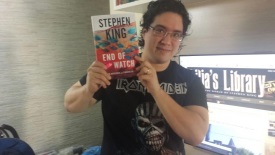