If you’re expecting an adaptation of the short story it’s based on, Jerusalem’s Lot, you will be disappointed. Chapelwaite is based on that story but there is very little from the story that has survived in this TV series. With that said I’m not saying that Chapelwaite is a bad TV series, it’s actually not. It’s just very freely based on the story.

In the show we get to follow sea captain Charles Boone that after his wife dies and he decides to leave his ship and settle down with his three children - Honor, Loa and Tane in Chapelwaite, a house he has inherited from his relatives in the sleepy town of Preacher’s Corners. Very soon it’s clear to Charles that the townsfolk don’t like him and his family. The reason is that they feel the Boone family is responsible for the illness that has swept throught the town and now they blame Charles for what Stephen and Philip Boone have done, or what they think they have done.

And while they are not correct in their assumption that Stephen and Philip are responsible for the illness, the Boone's do want to harm the town and everyone in it. Instead of being dead (as everyone thinks) they are now vampires living in the small town of Jerusalem’s Lot with Jakub who is some sort of overlord for the vampires and with a special book he will summon his God, Worm, and the earth will fall in darkness.

The plot doesn’t hold all the way and the look of the vampires are a bit cheap but all in all I think it works. I like Adrien Brody as Charles even though he has a bad habit of whispering when he talks. Sometimes it could be justified but far from all the time. The show takes place in the 1850’s and the environment feels true.

I started off saying that you’d be disappointed if you expected the story here, there are very big differences between the story and the show. In the story the plot is told through letters which would have been impossible here. There are also no vampires in the story as there are here. Mainly it’s names, towns and the Chapelwaite house that is the same.

Is there a point to base a show on a story if the story is one that won’t work as a show? Well, there might be. Here they have taken the location and run free with it. Is the show good? I think so. Is it an adaptation of King’s story? No, it’s not.
Add or read comments 0 Comments
Close comments 0 Comments 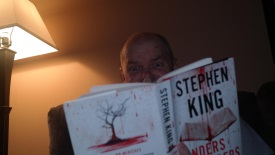