The Last Rung on the Ladder

The Last Rung on the Ladder is one of the so-called "Dollar Babies." The "Dollar Babies" are movies that King has sold the rights to for one dollar, under the condition that the buyer can make a movie based on the story but not show it with a commercial purpose.

James Cole made his dollar baby, The Last Rung on the Ladder, back in 1987. It's based on the story in Night Shift with the same name. It's about a brother and sister who in their youth used to play a game. The game was to climb high up in the barn on an old ladder, then fearlessly throw themselves out into the air… just to land way, way below in the haystack. On one occasion the ladder brakes and the sister is stuck way up in the air, hanging onto the last rung on the ladder. The brother then moves enough hay to save her from breaking every bone in her body, or even worse getting killed. Years later when they are older the sister jumps from a building and kills herself.

Before she does, she writes her brother a letter which contains a cry for help. This letter doesn't reach the brother in time to save her though, since he moved around a lot and always forgot to send her his new address. Her letter is therefore forwarded to a different address after address after address… It's a very emotional story. It proves that King can write other types of stories as well as he writes horror.

So, this story is the one that James Cole chose to adopt and turn into a movie. I can see why. If you're a young filmmaker with no or very little money it would be hard to do a movie that requires a lot of makeup and special effects; this one doesn't! I don't think that's the whole reason that he chose this one though. I think he felt for it, well I know he did. This is a story you feel for!

I'm also glad to say that I feel that same feeling in the movie. It's there and you (the audience) can feel it from the first frame. The movie is a low budget one, it was shot with a Super-8 camera and with limited resources. But even still, the feeling is there.

On thing that I wished for though is that it should have been longer. As the movie stands now it's a bit hard to fully understand. The part with the kids is great, but when it shows the kids as grownups, that part is a bit short and I think you need to have read the story to get all the depth that is in King's story. This is nothing unusual though when it comes to movies based on King's work.

Lilja's final words about The Last Rung on the Ladder

This 12 minute short film is totally worth seeing and I don't understand why King isn't granting Cole the right to show it commercially. OK, it's a low budget movie but it's still a movie that all King fans should get the chance to see!

In the movie he uses King's old trick, to let characters from other works show up. In this movie it's Miss Abigail from The Stand that is mentioned.

I hope James Cole will soon be doing another King movie, I'm sure he would do a great job with it! 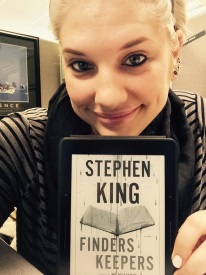