Castle Rock has reached the end of the first season. Before I saw it I was worried that they wouldn’t tie it all together. That they would leave a lot of questions open. Now that I have seen it I can only say, they did. Let me explain. We’re back from the world where Bill Skarsgard is Henry and he is back to being The Kid. Now we have André Holland as Henry again. Or do we? The Kid claims he is Henry but from another world and all Holland’s Henry needs to do is follow him back out into the woods and he’ll show him.

I get the feeling that he is saying that when the young Henry was missing for those days back in 1991 he was actually in The Kids world and in a cage in Ruth’s cellar. Molly though seems to exist in both worlds at the same time but as two quite different persons. To complicate it even more Ruth is trying to commit suicide by jumping off the bridge in town while Molly tries to talk her down. When she does Ruth tells her that this always happens indicating that she’s done this before and since Molly can’t remember that time is somehow acting up and repeating itself.

These things we never get explained. We can guess like I did just now but we don’t know. Eventually The Kid gets Henry out into the woods while pointing a gun at him. While they are out there a lot of birds are circling over them (gets me to think about The Dark Half) and Henry remembers himself pushing his father over the cliff. But nothing else happens and eventually Henry manages to take the gun from The Kid and for a second The Kid looks like an older version of Henry’s dad.

Then we jump a year forward. Henry is now back working as a lawyer and seems to be doing fine. It’s also revealed that he has put The Kid back into the cage below Shawshank. And the episode ends with The Kid smiling, indicating that he is just where he wants to be. Lots of questions and unanswered stuff left hanging. Not what I wanted but maybe there is an explanation that I don’t see? Maybe someone out there can explain the following things to me?

Who of them was really Henry? Both?

Was there two worlds?

Did Skarsgards character really want to leave or did things go as he planned all along?

What was the sound? A Thinny?

Did reality repeat itself like Ruth said while on the bridge?

Anyone know? Please enlighten me!

It’s a frustrating ending of the season. You have to do a lot of guessing and maybe if you re-watch the entire season it will become clearer but right now I’m confused and a bit frustrated by the seasons ending. There is a lot of stuff left unexplained and I personally wish they hadn’t done it that way… 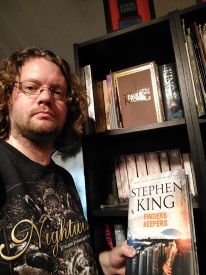