This isn't really a King work, but rather, this is a work with King in it. In this episode of The Simpsons, King appears as himself for a short while.

First I would like to say that this is like any other episode of The Simpsons, either you like it or you don't. It's not a Stephen King special.

The episode is about how Krusty the Clown finds out that he has a daughter (Sophie) who is now 10 years old. Since he has absolutely no idea about how to raise a child, he turns to the one man who would know. Yes, you guessed it, Homer Simpson.

The episode then tells the story of how Krusty loses his daughter's violin and has to get it back from the mob, with Homer's help.

Where does Stephen King fit into all this, then? Well, the episode starts with a trip to a "Springfield Festival of Books" where King sits and signs books. This is where Krusty finds out that he has a daughter. How did author Stephen King find his cartoon way into an episode of The Simpsons
? Well, there could be many reasons...
1) King is a famous person.
2) You can't do a book festival and not include King.
3) King and the creator of The Simpsons, Matt Groening, both play in the same rock band, The Rock Bottom Remainders.

Unfortunately King only has 3 lines and then he's gone from the cartoon.

If you like The Simpsons, you will probably like this episode, but if you don't care for this cartoon series, you probably won't like this one either, King or no King. If you don't think you'd like it, but you enjoy Stephen King, I think you should check it out anyway. If for no other reason, to see how King looks as a cartoon -- as drawn by a fellow band member!
Add or read comments 0 Comments
Close comments 0 Comments 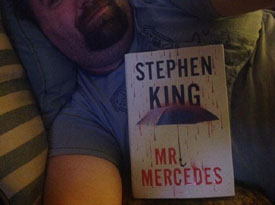