The Mist Episode 3 - Show and Tell

Things are heating up. At the mall things are starting to get out of hand and people are starting to regroup. One group is led by Eve and they are taking their escape to the loading area and I can’t not think about what happens there… Jay is trying to make things better with Alex and claims he didn’t rape here, that he was only putting her to bed so she could sleep it off. Alex seems to consider that this could actually be what happened but Eve doesn’t.

The two military personnel that were found hung are put outside by the two guys from the game store in the mall to see what’s out there. They are using them as bait in other words. As far as we know now nothing happens to them but I’m sure we’ll see more on this subject as the show goes on. Hopefully we’ll see a big scary monster attack them.

Speaking of monsters. At the church Natalie is determined to get to her dead husband. And when a young man tries to stop her a bug flies into his ear and big wings bursts out on his back. Not sure what that is all about or if I like it but it’s a bit more supernatural than I expected. I think and hope though that we’ll get an explanation later. Anyway, that is enough for Natalie to think she has seen God…and it’s not the same God as Father Romanov worships. What that means, we’ll find out later I guess. Frances Conroy is great as Natalie and I’m almost ready to join her flock...

I enjoy the events at the mall the best and I really like Gus Redman. He seems like a normal man trying to handle a very un-normal situation. He is very well played by Isiah Whitlock Jr. One other thing I liked was the way they played out the scene where they cut down the army people who hung themselves. The woman falls very realistic when she is cut down. Made me jump and squirm a bit.

Lilja's final words about The Mist Episode 3 - Show and Tell

So far the series works for me. I’m looking forward to seeing creatures from the mist and also see what the “bird-man” was all about. That and Natalie going crazy which I’m certain she will.
Add or read comments 0 Comments
Close comments 0 Comments 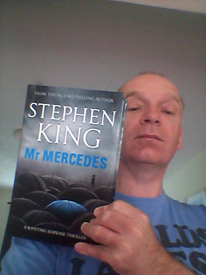