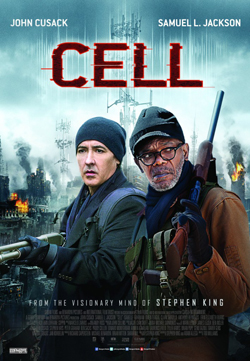 After being ready, just waiting for distribution, for almost two years Cell is finally being released. And it pains me so much to say that I almost wish it hadn’t. There are some good in it but there are several major mistakes. The biggest, the one that gets this reviewer really angry (and you won’t like me when I’m angry…sorry that is another movie), is that they change things for no apparent reason. They have Clay in an airport when the Puls happens instead of on the street of Boston. We do get Pixy Dark and Pixy Light and many of the events from the book but why have them taking place in the airport?

When Clay meets Tom he is no middle-aged gay man. Now he is a subway driver that knows his way around guns. Why? I loved the gentle Tom from the book and here he is a totally different character. Only reason I can see for this change is that they wanted more of an action character. Tom is played by Samuel L. Jackson and he plays Tom very much like he played Zeus Carver in “Die Hard”.

Instead of first going to a hotel, meeting Alice and then going to Tom’s house they go straight to Clay’s apartment where Alice is his neighbor. [Side note] tell me if I’m crazy but the dialog when Alice comes to Clay’s apartment must be from the song “Luka” by Suzanne Vega [end side note]. Why make that change? I can see how they wanted to shorten the story but why not let it still be Tom’s house? That would have worked just as well. Alice in the movie has no problem taking up a gun and killing people and I also think that Isabelle Fuhrman who plays her looks much older than 16… The Raggedy Man is now the main villain from Clay’s graphic novel (say what?) and it’s like Clay knew about this before it happened. The list goes on and on I’m sad to say…

Other problems the movie has is that the events happens too fast. Tom, Clay and Alice figure things out way too fast for it to be believable. The special effects leave a lot to be desired. Some of them are okay but most of them look pretty fake. Some of the kill scenes almost look comical. Don’t get me wrong they are brutal and there are loads and loads of blood but still they look comical. And Clay’s hat, what’s up with that? He puts it on at the airport like a talisman and he looks ridiculous in it throughout the movie. I wish John Cusack who plays Clay would have said no to that.

So, I can see why this movie was on the shelf for two years while trying to get a distributor. It’s not a good adaptation of King’s book. The script is supposed to be written by King and Adam Alleca but who’s done what I don’t know. I have a hard time seeing King rushing the story along as it is here but that is just a guess on my part. Anyhow, the movies two biggest problems are that they rush it which gives what happens zero credibility, you don’t care about the characters and it seems illogical. The other problem is that they have changed a lot…and I mean a lot…of the story without any obvious reason and that I don’t like. I understand that some things might be changed for one or another reason but here we have a ton of very strange and unnecessary changes. 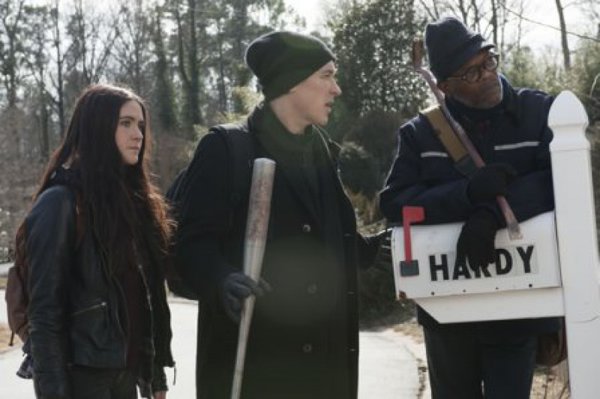 I did start off with saying that it’s not all bad right. Well, there is one thing that I liked because it was so unexpected and that is the end. They have (once again) made a change from what happens in the book but this time it’s quite surprising and that was actually a positive thing to end with.

To finally see a movie after waiting for it so long and then find that it’s bad (and I had low expectations to start with) is a real downer. I so wished for this one to be good and worth the wait but I’m sorry to say that it was not.
Add or read comments 0 Comments
Close comments 0 Comments 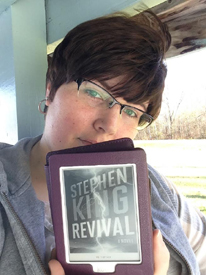