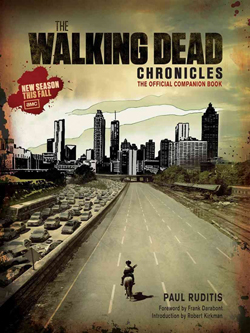 The best way to describe The Walking Dead Chronicles: The Official Companion Book is as the bonus feature on a DVD but in book form. It gives us a look behind the scenes of the phenomenon that The Walking Dead has become. It focuses on season one of the TV series and goes throw the episodes, showing us storyboards, how the special effects were done and it also compares it to what happens in the comic. Some events follow the comic extremely close while others go a totally different way. Some characters only exists in the TV series while others dies early in the comic but are given a second chance in the TV series.

The Walking Dead Chronicles is definitely a book you want to read from cover to cover and you’ll find both big and small things you didn’t know, even if you have read the comic and watched the TV series. We get to read Robert Kirkman’s (the series creator) pitch for the comic that he used when he tried to get it published. And it’s somewhat different than what it later became. Very interesting reading.

Throughout the book there are some fact pages containing shorter facts articles about stuff from the comic and the TV show. It’s about episodes, parts in the comic and so on. Stuff you really want to know. All together this is a must have book for all fans of both the comic and the TV series (are there any fans that just like one of them?). It has so much stuff in it that I bet I could read it again and find new things. All the facts are accompanied by photos from the TV series as well as pages from the comic. Frank Darabont, how created the TV series, has written a foreword and Robert Kirkman, creator of the comic, has written an introduction. Both men talks about the love for the comic and TV series and their part in making it the success it is today.

So, there you have it. The Walking Dead Chronicles: The Official Companion Book is a book you should really go out and get a copy of. It’s all you ever wanted to know about the comic and TV series and more. 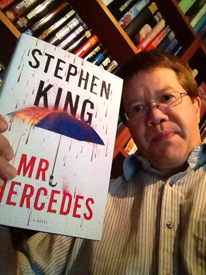