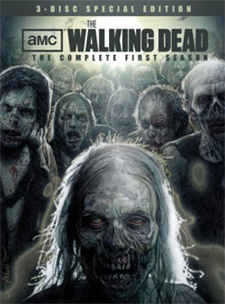 In this review I will focus on the stuff that you can find here in the special edition DVD that you can’t find on the regular edition (reviewed here). One major thing we get here is the black and white version of the pilot. And yes, it makes a difference if you watch it in black and white instead of in color. Personally I prefer the series in color but its fun to see the pilot like this and I’m glad I got the chance. I would suspect that it’s Frank Darabont we need to thank for getting the chance to see this version. He did the same (releasing a black and white version) when “The Mist” was released on DVD.

Besides the black and white version of the pilot we also get a lot of extra material on this third disk. We get a documentary (about 1 hour long) that shows us how the series was shot. We get to follow the cast and crew during the filming and see how they prepare a shoot, how they do the shoot and how they decide if it’s the shoot they want or not. Very interesting.

We also get a documentary on how the special effects where done. Both the ones that Greg Nicotero and KNBEFX did and the once that where done on a computer. These kinds of documentaries are just what I love to see when I turn on the extra material so I’m extremely happy with it.

The other documentaries that we get are about the comic, how the comic was transformed from the comic pages into the TV series, told by Robert Kirkman (who’s done the comic) and Frank Darabont. The disk then ends with a conversation between Darabont and Nicotero about The Walking Dead but also their relationship and how it has evolved.

This is definitely the edition you want to go for if you haven’t bought the series already. If you have you should still consider getting this version. The extra material is really good and I enjoyed them very much. 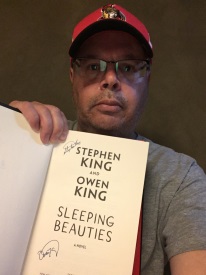