OK, Haven is over for this time. A second season will premier next year but for now it’s over. So, did the last episode bring us any closure on The Colorado Kid mystery? No, not really. There were some very interesting things happening and some questions got answers but a lot didn’t. And we got a cliffhanger that was interesting and quite unexpected. I’m glad though that we get a second season because I really want to know what this will lead up to. I won’t go into details here because it would ruin the entire episode for you but you’ll know what I’m talking about once you see it.

My overall impression of season one of Haven is good though. It’s a good series that have a chance of being really good once the characters have been given a chance to set with the viewers. I guess the big test will be season two. If that one works out well the series might be long lived. However I feel it was a bit of a mistake not to take care of The Colorado Kid business. I know I keep coming back to that but the series is based on King’s book The Colorado Kid (as you can see in the intro) and because King fans are quite demanding making a series of it with so little in common with the book might come back and bite its creators in their a**es…

Reading the script for this the last episode I was hoping to get a clue to where they are going with season two but there isn't anyone. The script ends just as the episode does and there isn't any hidden clue there as to what will happen in the future. I guess not everything is in the script...

As I said, the season ended with a very strange cliffhanger and I’m looking forward to see how they will solve what they left us with. Personally I have no idea… BTW the episodes name is Spiral. 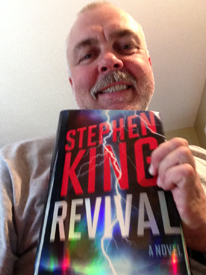