In this ninth episode of Haven called As You Were we get two nods to King…sort of. One is the hotel Audrey is taken to for the surprise birthday party, it’s very much like The Overlook and we find out that Nathans middle name is Thaddeus, the same as the mail character in King’s book The Dark Half. OK, they are farfetched I agree but they are there if you want to find them.

The story itself is about a surprise birthday party Nathan, Duke, Dave, Vince and some others are having for Audrey at a big hotel. The manager, that most of them has known for very long, seems to be something no one expected. He is a shape shifter that kills to get a new shape. He has had the hotel owners for 22 years and now all of a sudden decides that he needs a new one. In other words, someone at the hotel is now the shape shifter, the big question is who?

The episode is a good one and also a very different one compared to earlier once. Once of the big differences is that we actually get some info about the woman on the photo as well as the little boy standing beside here. And that is about time. This is episode 9 of 11 and we need some answers. We didn’t get them here but we did get some info that might lead to answers…

AS I mentioned in the review I thought the hotel where Audrey got her surprise birthday party was a lot like The Overlook hotel. Well, in the script it’s compared to Shutter Island and not The Overlook...

In the script there is also a note that gives the director an indication on how the writer wants a scene. And I think they succeed this time with creating what writer Jose Molina was looking for. Judge for yourself:

“(NOTE: The goal here is to establish the vastness and the emptiness of the place without adding any set-ups, shooting only the locations we’re already in and using the montage to transition from day to night.)”

As I said, I’m glad we finally get some info about The Colorado Kid case but with only two episodes left I sure hope more is coming…and soon. 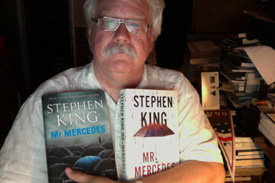