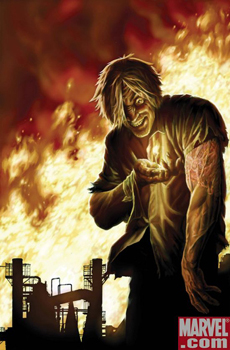 It’s finally time to get a closer look at Trashcan Man and after reading issue #2 of American Nightmare I can only take my hat off for Mike Perkins. He has managed to make him look very much as I imagine him when I read the book. He looks crazy, he looks hunted and he looks just as I had expected. I’m very pleased!

We also get to meet Lloyd Henried as the only surviving inmate on the maximum security prison I Phoenix. He is alone, locked in his cell and domed it seems. If you have read the book you know better though…

Harold and Frannie are also back and, as before, Harold is really excellently portrayed. He really is that geek we know from the book, the geek that once given some power will get back for all the years he was just a nobody.

Besides these characters we also get to see more of Nick and Larry & Rita. The issue doesn’t really move the big story forward though but that is just as it should. I love it that Roberto Aguirre-Sacasa is giving the story time to develop, time for the characters to evolve and grow, just as they do in the book. It really strengthens the story.

As a bonus we also get to follow the development of the issue from script stage to finished page and it’s interesting to see how Roberto’s text is transformed into the illustrations we see on the finished pages through Mike Perkins and Lisa Martin’s hands. Everybody has done a good job on this issue.

We keep getting more and more characters for each issue and even though I’m quite eager to get to know them all I’m very pleased that they all each get the time to be thoroughly introduced in the series. 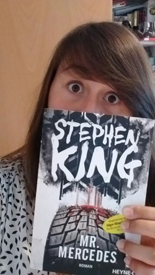