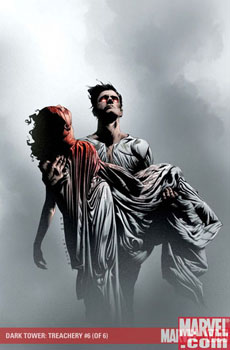 Treachery is over, and what an ending. Roland and Aileen gets closer to each other then Roland expected but they are interrupted when things are starting to get exciting. First by a murder committed by Cort and then by an event that ends in Roland committing murder himself. The person Cort kills is the riddler that appears in the previous issue and the reason is that Cort finds out he’s a spy, working for Farson. Cort then deals with him in the only way a Farson spy deserves. Why and who Roland kills I’m not telling you. You deserve to read it for yourself but I’ll tell you this, it’s very dramatic and sad.

This issue is also the first in which Roland speaks of The Dark Tower. He feels that whoever, God or Demon as he says, rules the tower can turn back time and gives him back Susan and get rid of Farson. I’m not sure that Roland believes this later on when he actually reach the tower but this is why he started his quest.

No Alain or Cuthbert in this issue and even though I haven’t counted the pages it feels like they are fewer (if you only count the comic pages) in this last issue. Or maybe they just flow faster? I don’t know for sure.

The history lesson this time is about the riddling and Mid-world fair-days and when each of those took place. We also get a couple of riddles (for each fair-day) to answer to get an idea about what they could look like and I must admit that some of them are quite hard. Luckily the answers can also be found in the issue.

We also get some sketch versions of pages from this issue, images of tarot card made by Richard Isanove for the upcoming Dark Tower: The Sorcerer. I’m not sure if they will actually be real cards though or just images in the issue. Any way they look very cool.

I’m happy with this ending. It resolves most things but also gives us some new to think of for upcoming story arcs. What will happen to Roland and Aileen? Will Roland leave for The Dark Tower? Will Farson destroy Gilead? Hopefully we’ll know more in upcoming story arcs.

This issue is no exception to previous issues. It gives me what I want and expect and I think they came up with a really interesting ending to the arc. Now I can’t wait to start the next one… 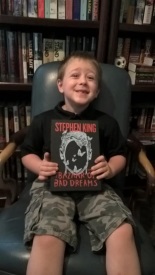