Annie has just lost her husband in a plane crash a few days ago and now it’s time for his funeral. While she is getting ready for it and her family waits downstairs the phone rings. At first she is annoyed that no one picks it up, not even the answering machine, and she has to do it herself. When she does and hear her late husband James on the other end she understand that this call is for her and her only…

The New York Times at Special Bargain Rates is a quick read but as I said a very good read. It reminds me a bit of Sorry, Right Number but better. I feel that if King wanted he could easily develop it into a book instead of just a 3½ page short story.

When I read The New York Times at Special Bargain Rates I really started to think about it and would really like to know more about what happens after the call. Where were James? Where did he go and what was it like there?

The New York Times at Special Bargain Rates is definitely one of King’s better short stories. It tickles your imagination and gets you thinking about what could have happened and what will happen. In other words, it do what a good story should do! Oh, and you just have to love the ending…
Add or read comments 0 Comments
Close comments 0 Comments 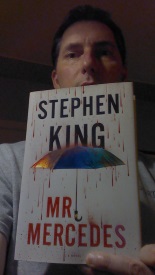